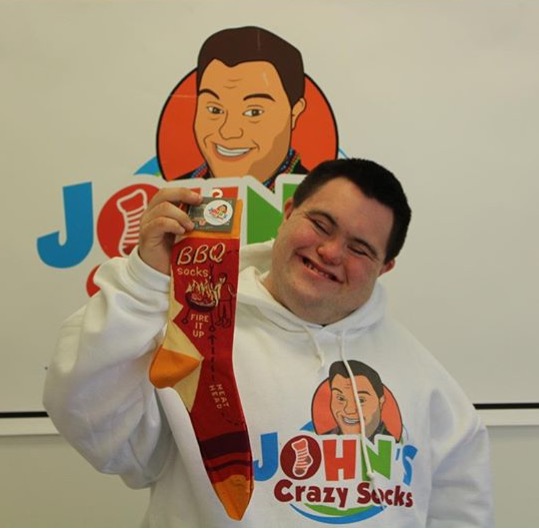 Co-Founder of John’s Crazy Socks, John Cronin on why Down Syndrome is no barrier in growing a six-figure business

What excuses do you have for why you aren’t ‘making it?’ Is it because you don’t have time? Because you’re tired? Because your parents aren’t rich? Do you have Down Syndrome? You read that last excuse right. Because if not, you really have no excuse at all. Still not convinced? Meet John Cronin, a young man with Down Syndrome and founder of John’s Crazy Socks, a growing multinational sock business.

John’s Crazy Socks (JSC) isn’t any ordinary profit driven business. Together with his father, Mark Cronin, John has a much more altruistic approach to his business. ‘John’s Crazy Socks has a mission to spread happiness through socks and is built on four principles – offering great socks that let people express themselves, fast and personal service, giving back and showing people what is possible.’

With a background in business, public service and technology, Mark took a foray into the world of e-commerce and ‘in late 2015, I set up a company to start some online businesses.’ Having graduated from High School John maintained his ambition of joining his father in business, although not all their ideas were as inspired. ‘I had some ideas like opening a Fun Store or a Food Truck. The Food Truck wouldn’t work because neither of us can cook. In November, I told my Dad that we should sell socks.’

The idea was simple, with low-cost overheads and a providing a tentative introduction into the world of business, but Mark also envisioned another unseen advantage. ‘John came to me with the idea to sell socks. He had long worn crazy, colourful socks and he said, ‘let me be me.’’ Whether intentional or not, this approach meant that John could do business on his own terms, away from the stigma and misconceptions that parts of society still have towards those with Down’s. For John, it was more straightforward – he had found something that reflected him and something that he thought would be successful. ‘The more I talked to my Dad about selling socks, the more excited we became. I came up with the idea of calling it crazy socks and my Dad said we should name it after me. That’s why it’s called John’s Crazy Socks.’

Some might assume that this a venture in which John is the front-man for a business run by his father, but the Mark quickly puts this assumption to rest. ‘John is involved in all aspects of the business. He has many good ideas. We work in a collaborative way so that we both agree on what we will do. John came up with the name. John picked the logo. John came up with the idea to put candy in each order.’ John is also aware for the need for close work and collaboration between the two and the wider team. ‘I come up with ideas all the time for my business. But my Dad also has ideas. We talk about them and then decide together what we will do. I came up with the idea for the autism socks.’

Having launched just six months ago, it seems almost unnatural for the pair to talk about the time when they began their business, but such has the success for JCS’s business been that their launch may now seem like a distant memory. Capitalising on Christmas consumerism, JCS launched in December 2016, initially sourcing outside suppliers and giving Mark a means to test the market. ‘When we began, we sold socks designed and made by others’ and an immediate surge in demand showed the pair that they might be onto something.

Since then, JCS has featured its own designs, the first of which was a Down’s Syndrome Awareness sock. ‘It was John’s idea. We were looking for a Down syndrome sock to celebrate World Down Syndrome Day – March 21. We could not find one, so John suggested that we make one.’ An immediate hit with customers, John has since designed socks to raise awareness of many other causes. ‘My favourite sock is still the Down Syndrome Awareness Sock, though I love a lot of our socks. Right now, I am wearing our Autism Awareness Socks and I like the Shark Socks we made for the Special Olympics.’

What makes the business so successful is the personalised approach that the pair adopt. For starters, the company emblem itself is a cartoon of John and given that many of the initial sales were local, the pair saw the opportunity to add a more personalised element to their business with John making home-deliveries. ‘People loved it and started posting pictures on Facebook of their socks and John making the deliveries. Word began to spread.’ For John, it’s not just the personal deliveries that customers respond positively to. ‘When we were getting ready to open, my Dad and I made some videos that we posted on Facebook and people liked the videos. People liked it when I delivered the socks to their homes and they liked the thank you note and the candy we put in every package.’

Its these small gestures and the mindset of empowering those with disabilities that have resonated with their customer base and given Mark a platform upon which to expand into the UK and Europe. ‘We are now shipping to the UK and have many happy customers there. We are exploring the feasibility of setting up a distribution centre in the UK and an online store dedicated to the UK and as with the UK we now ship to Europe and are looking at setting up a distribution centre there with regional online stores.’

Empowering those with disabilities is in part due to Mark’s own experience with the misconceptions that others have of those with Down Syndrome. ‘The error that people make is to assume that a person with Down Syndrome is helpless. For example, John cannot do math in his head, but he can use a calculator to do basic math skills. The fact that he cannot do math in his head does not mean that he cannot tell time or show up on time for an appointment or that he is unable to follow directions. We all have strengths and weaknesses and we should not be defined by our weaknesses. People also tend to see people with Down syndrome as childlike, yet John has a complex view of the world and adult feelings and sensibilities.’

For John, Down’s Syndrome doesn’t present any disadvantages at all. ‘I do not feel that Down syndrome has limited me. It is part of me. I can do the things that I want to do. There are somethings that my brothers could do that I cannot do. They can drive and I cannot drive, but I get rides when I need them and I can take the bus. My brothers played football and I could not, but I play a lot of sports including some they do not play like snowshoe.’

John may be thriving now, but Mark recalls stressful times shortly after John was born. ‘The biggest scare and threat from Down’s Syndrome came immediately after John’s birth. On day two of life, he needed intestinal by-pass surgery. Before he turned three months old, he underwent open heart surgery. Fortunately, John has been healthy since.’
Mark is also keen to impress that those around John have always remained supportive. ‘John has been fortunate that our community and school system has been supportive and inviting. He has not faced prejudice.’ In spite of this, there have been occasions on which John has seen toe-curling attitudes toward those with Down’s Syndrome. ‘The worst example by far came when John was first born. He had complicated medical issues and a doctor in a dismissive way told us, ‘they try to save these babies nowadays.’’ As for best examples? ‘They are countless. Some come where you would expect to find – the school. But it came in other places too. John worked for his mother’s law firm and would take the mail to the Post Office every day. The people at the Post Office loved seeing John and treated him like every other customer. Their behaviour boosted his confidence.’

It’s clear that the two want to be an inspiration for others with syndromes and those who traditionally have been sidelined or marginalised by society and are backing up their words with actions. Remembering that this is a business that launched six months ago, donations of $20,000 upwards to a number of charitable organisations, ‘with no requirements to charity partners’ are nothing short of remarkable. Mark is also keen to impress that giving back comes not through just money but in the manner in which the pair are growing the business. ‘We raise awareness through our socks and the way we promote our charity partners, but also in the way we conduct our business. We hire people with disabilities and constantly show what John can do. The key for us is simple: focus on what people can do and not their limitations. Match people to jobs that fit their skills. John and others with Down syndrome will rise to challenges if given challenges. If we expect more, people will do more.’

For Mark,  empowerment of others is one of the most rewarding aspects of the business. ‘It is a great opportunity to work with my son and to show people what is possible. We built a business on treating people well, giving back and most importantly, showing what John and others with disabilities can do.’

John’s Crazy Socks is a growing success, in part due to the simplicity of the product and in part because of the pair’s love for the business and aim to inspire particularly those with disabilities. Whilst many people will blame circumstance for not living the life they want, John Cronin has simultaneously embraced Down’s Syndrome and dismissed it as a barrier in achieving his goals, showing complete confidence in his product. ‘I always thought John’s Crazy Socks would succeed because I thought everybody would love our socks.’ Down’s Syndrome isn’t something he chose, but he’s not spending time complaining. He’s busy working with his father to find more causes to raise awareness for, whilst growing his business and spreading the message of empowerment. So just what is your excuse?
Our thanks go to John Cronin and Mark Cronin for making this interview happen.
You can check out John’s Crazy Socks at johnscrazysocks.com
Alternatively check them out on Instagram @johnscrazysocks or on Facebook at facebook.com/johnscrazysocks
Article is © of IYO Magazine

iThere are no comments

Begin typing your search above and press return to search. Press Esc to cancel.